Q&A: How Do I Not Take Things Personally Anymore?

How Funny, Amy Schumer and I Have a Twist of Lyme in Common!

Having a Fun Mercury Retrograde Yet?

How is Mercury Retrograde going for you????!! I am just coming up for air here. This has certainly been one of the hardest, most challenging weeks of my entire life.

Just found out today a beautiful soul in the TDN community whom I have hugged many times with great joy at our events, has chosen to end her life in physical form and gave herself to a river. Bless her soul’s journey. Loving myself through what is arising through that.

And, this whole past week I have spent with my sister taking care of my dad's very sudden increase in his care needs for Parkinson's and Lewy Body Dementia (the illness Robin Williams had). We have been in and out of the ER with him and he's now at a geriatric psych ward for everyone’s safety until things stabilize. He went from being able to speak coherently, walk, eat unassisted, and care for himself, to being able to do none of those things very rapidly.

Having been on the receiving end of dad being abusive on so many levels throughout my growing up, although I wasn’t quite at the point of actually liking this very challenging character, I have appreciated the place we grew into in our relationship in recent years. It took a LOT of forgiveness and personal growth. In the past decade, he really worked to be more peaceful, kinder, and softer. I have, too. It’s been nice to have things lighter, and to share some laughs again with each other. I have learned so much about myself and life from one of the toughest characters I could ever imagine writing into my play of life. I have learned you don’t have to like someone no matter what their relation is to you, but you can still have love and compassion for them on a soul level. And, it’s never too late to forgive and heal at even deeper levels than previously thought possible.

However, I was not prepared for the shock this journey has taken this past week.

Given my profession as a healer over the years, I am familiar of course with “dark night of the soul,” with the sometimes messiness of spiritual awakening, and the utter destruction and dissolution that can happen throughout kundalini awakening and the falling away of ego.

I was absolutely not prepared for the surprises brought to light through dementia, though.

It was deeply horrifying and jarring on a cellular level to have dad all of the sudden become that energetically ugly, unpredictable, angry, verbally abusive, violent version of his former self again. Like an even worse version of my drunk high school dad, he hurled horrible words, insults, and things at the ER staff, me, and my sister. Most of it was nonsensical, but some of it felt very hateful and frightening.

I was not prepared to have my inner child feel unsafe again in his presence. Even through feeling the visceral memories, triggers, and adrenaline rush, we tried to soothe and comfort him through his outburst and outrage, knowing “this wasn’t him, it was the illness.” He would be as horrified as we were to see what went down in the ER!

In the days that followed at the psych facility, he appeared to have aged 100 years. He was weak, frail, delusional, having dark hallucinations, and was still angry. He was confused, paranoid, and nothing he spoke of made sense. He kept playing with his hospital pants and asking for Scotch tape to tape the sides of his pants together. It was heart wrenching to see this particular scene of his life’s journey. It’s as if everything in his life was tumbling around in a washing machine, and it was randomly spitting out a sock here, and a shirt over there. Random phrases, names of people both dead and alive, and various happenings from his jobs over the years all were on spin cycle.

Having had issues with how dad has inappropriately touched me over the years, and how he has degradingly treated and talked about women his whole life, I found myself overcome with emotion by his distress and reached out to put my arm around him and rub his back, hoping that could comfort him….that it might be a glimmer of peace, sanity, and familiarity. My sister was surprised by my actions. I think I was, too. I chose an even deeper level of forgiveness and compassion.

A couple of times during our visit, he teared up, and so did we. His words made no sense. Then he suddenly said he didn’t want this to be how it was “until the end.” He grabbed my sister’s hand and pulled it into him and placed his forehead on their clasped hands. My sister and I looked at each other with wide eyes and just lost it – dissolving into puddles of tears. We are not sure he knew on a cognitive level what he was doing, but we felt it on a gut, soul level. It was a beautiful moment of connection beyond any words of any realm.

I tried to see if he could be reached on any level using stories, humor, memories, all his favorite things, music, etc. Then I spoke to his soul out loud. I called forth “the part that can hear and understand what I am saying.” I said everything that needed to be said and that would put his soul at ease. His fidgeting stopped for a few moments, his body relaxed, and my guides told me he “got the message.” I felt relieved.

And, what became so strikingly clear, was that truly the only thing he responded to was love. Conversation wasn’t an option. He didn’t know where he was, or what was going on. I tried one more thing. I said in a firm, loud voice, “Dad, I love you.” He instantly responded back, “I love you.” My sister and I were shocked and in tears. I repeated it to see if it was a fluke. He responded again with love.

No matter the characters, the play, and how things look or feel, there is love. Always love. Ever present and eternal -- love.

I am exhausted physically and emotionally, yet paradoxically have never felt so strong. I could use a long nap, many hugs, and perhaps one square of chocolate.

May love continue to always light the way for all hearts here and in the beyond. 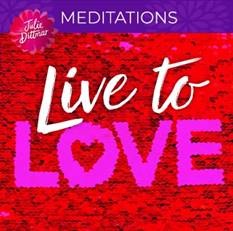 Q&A: How Do I Not Take Things Personally…

How Funny, Amy Schumer and I Have a…